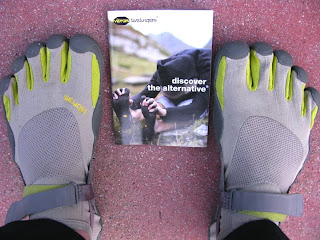 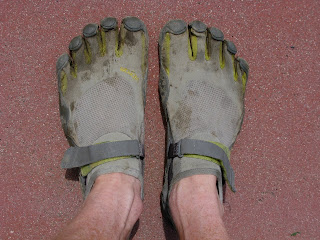 I got some Vibram 5 Fingers (VFF) shoes at the end of December 2009 and during the past 4 months I've been experimenting with running in them, to get my feet wet in this barefoot running business that has been much in the news of late. (Technically-minded folks will note that if you're wearing these shoes you're not barefoot, but you're pretty darn close.)

I'll use this post to provide some background links as well as describe my first-hand experiences. I included a couple of self-photos of my KSO's: the first shot was taken during the first week I had them, and the second was taken about 3 months later, after wearing them during the run portion of the Golden Bearathlon. It was a muddy 10K trail run and the shoes cleaned up nicely in the wash. I don't do all my runs in these shoes now, but I'm gradually moving in that direction.

Probably the most powerful thing I can say from my experiences would be this: Since I started running in the VFFs, I have dropped my dependency on the custom orthotics that I've worn religiously for the past 15 years. In 1995, I had the orthotics made and wearing them greatly reduced my running injuries; basically I never did a run or went anywhere without them since '95.

However, this has all changed since I've been running in the VFFs. These minimalist shoes are basically socks with some rubber on the soles -- you cannot wear orthotics in them (well, you could, but it would feel very clunky and biomechanically unnatural). So I've stopped wearing the orthotics whenever I run, even when I run with regular, heavy-soled running shoes. I have not encountered any chronic running injuries since, and I no longer need to worry about where my orthotics are at all times (though I still prefer them if I have to do a lot of walking/standing, e.g., spending the day at Disneyland).

I've been running for fitness for the past 30+ years wearing conventional, cushy, industry-standard running shoes (usually something neutral like the Asics Gel Nimbus). Since running in the VFFs, it's become apparent how woefully undertrained my calves were. By promoting a rear-foot strike (RFS) running form (i.e., landing initially on your heel, then rolling off the toe), standard running shoes effectively shield the calves from doing much work.

Before I acquired the VFF shoes, I spent 1-2 months working on a more fore-foot strike (FFS) running style using my traditional thick-heeled running shoes. This included some barefoot running on grass. I experienced lots of calf soreness during this period, especially after harder, faster training sessions. It took a while to switch my running form from RFS to FFS -- I'd say a solid two months before it started to feel natural. I was lucky enough to get some great coaching from local track coach Steve Kraft to help me learn this new running style, which has more elements to it than just foot strike.

Once I got the VFFs and started doing faster and longer runs in them, my calves experienced even more soreness. I took it fairly easy, running only on soft surfaces (like trails or rubberized tracks) once every 1-2 weeks in the VFFs, using my standard cushy shoes for all other runs. The first time I did a mile's worth of total speedwork in the VFFs, my calves were sore for a week, hard to walk or even bike for the first few days after. Additional feedback on my VFF running form from other experienced runners revealed that I was running too much on the balls of my feet, putting excessive strain on my calves. With practice, I was able to adopt a more neutral foot strike.

Update, 19 May 2010: Here are a few additional thoughts and tips on barefoot or minimalist shoe running:

This is the most common question I get from random, inquisitive strangers that notice my VFFs when I'm out in public with them. In short, yes they are quite comfy when just lounging around in them. But note that they give about the same degree of support as a pair of socks, so spending a full day standing/walking around in them on pavement will really wipe you out the first time you try it. About two months after I started wearing them I spent two back-to-back days wearing them while visiting Disneyland with my family -- this was definitely overdoing it.

The lightness of being barefoot

The lack of weight at the end of your legs while running is quite addicting. It leads to much less torque on your overall leg motion and permits a more natural gait and more efficient cadence. The low weight and lack of bulk of the VFFs also makes them highly portable. I actually biked with them in a fanny pack, along with a bunch of other gear, for the entire MS150 bicycle ride from Houston to Austin in April 2010. They were my après-cycling footwear.

Barefoot-style running trains your leg muscles, feet, joints, and connective tissues to learn to do more of the shock absorbtion that we've been delegating to conventional running shoes. Running barefoot or with minimalist shoes like VFFs trains your legs to acquire those shock absorbing powers, essentially building a running shoe into your body. Transitioning from a RFS to a FFS style and adapting to minimalist shoes feels like it has given my running legs another "gear" that I can employ regardless of my footwear. It is a more muscular style of running where the legs learn how to absorb the shocks of running and even obtain some elastic recoil from each foot strike. With a RFS running style where the shock of each footstrike is dissipated via the heel, shocks are absorbed primarily via the shoe plus your skeleton, which dissipates the impact energy and provides no recoil opportunity (and can in fact lead to loss of forward momentum via braking).

As Barefoot Ken Bob warns: Don't do too much too soon! There's a strong temptation to overdo it, especially as your feet and legs start adapting. But it really takes quite a bit of time to fully adapt to a barefoot or minimalist shoe running style. The transition is more difficult and longer for folks (such as myself) with a long history of RFS style running.

When starting out, pick the smoothest surfaces you can (such as grass, astroturf, or a rubberized track). Our soft, modern feet take a major pounding when running and bruise/blister incredibly easily. The first time I stepped on a rock the wrong way with the VFFs I got a bruise on the ball of my foot that was tender for several days, and even after 5 months of using the VFFs, I still get hot spots and bruises when I push the pace or terrain (though my feet now recover much faster). Over time, you will learn how to run more gently and your feet will toughen up, but it takes months (maybe up to a year), and you still must always be mindful of your terrain. The plus side of having barefoot/minimalist shoe running is it provides great feedback from the running surface that is otherwise masked standard heavy-soled running shoes. Especially when running on trails, each footstep is unique, giving you a deeper sense of connectedness with your environment and increasing the mental stimulation of running. It can be very reflexology-like. Run barefoot for best results here (feet and terrain-permitting).

Variety is the spice

Even if you are skeptical about the benefits of barefoot/minimalist shoe running and think it's yet another passing fad, you've got to admit that it is way different than what the running shoe industry has been doing for the past 30+ years and it gives a runner something new to play with. This helps inject variety to shake up your routine, get you out of your comfort zone, and can help keep your workouts from becoming stale. This all helps to keep you motivated, which is key to long-term success in sticking with your fitness goals.

Helps with tired feet, especially when walking/standing in them for long periods. Here are some stretches, all of which can be effectively performed while wearing VFFs (but not with standard shoes!):

Applying talcum powder on the inside of the VFFs helps a lot in fighting microbial odors and easing foot entry. I like Burt's Bees; Dr. Scholl's also sells powders with antimicrobial additives. Washing the VFFs with a powdered detergent once/week on a gentle or 'easy care' cycle then air drying keeps them in good shape. Just throw them in with your other laundry.